At the age of 15, Fred Harvey left his native England for the United States. Upon his arrival in New York City, Mr. Harvey began working in the restaurant business in New York. The Civil War was bad for restaurants, but good for the railroads, and Mr. Harvey made a career change. Over the next 20 years, Mr. Harvey moved ever westward and ever higher in railroad business, but never forgot the restaurant business. While traveling for the railroads, Mr. Harvey saw that much improvement was needed in the food department. 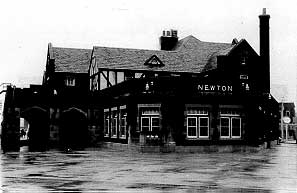 Upon arrival in Kansas in 1870, Mr. Harvey met Charlie Morse, President of the fledgling Atchison, Topeka, and Santa Fe Railway. For the next near-century, Fred Harvey’s company would bring good food at reasonable prices in clean, elegant restaurants, to the traveling public throughout the Southwest. They also brought civilization, community, and industry to the Wild West.

Harvey was a demanding employer who insisted that his establishments be run with precision and style. These high standards made the Fred Harvey name synonymous with fine food and assured a lasting partnership with the Santa Fe Railroad.

Harvey himself often made unannounced visits to inspect cleanliness and staff and he would fire a manager immediately for cutting corners. “Meals by Fred Harvey” became the slogan for the Santa Fe Railroad and helped to build it into one of the great railways of the world. 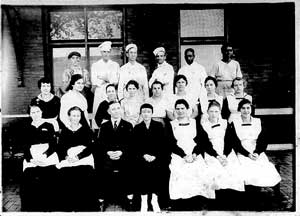 Santa Fe and Railway Express Agency employees, while on duty, could eat in Harvey dining rooms at a 20 percent discount by signing the guest checks with their names and occupations. In keeping with the Harvey tradition of excellent service, their own private grind of coffee was used and was considered by a majority of people to be of excellent taste.

Mr. Harvey continued to improve his service until his death in 1901. He had hired women at a time when most jobs for women were as domestics or teachers. His own experiences with the men he had hired to work in his establishments were as wild as the west was. He advertised in the East for women to work for him.

Paying as much as $17.50 per month with free room, board and clean uniforms, the company prospered with these new helpers. These women became known as the “Harvey Girls.” They were required to live in the sleeping rooms in the train stations and frequently transferred from one station to another in order to experience the “wild west.” There was a movie called “Harvey Girls,” in 1946 with Judy Garland, Angela Lansbury, and Cyd Charisse about a group of young ladies who go to the wild west to become waitresses in a Fred Harvey restaurant. 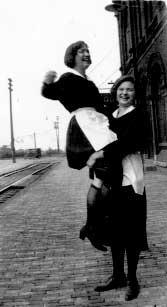 After Fred Harvey’s death, his business lived on under the management of heirs and successors until 1968. Mindful of Harvey’s standards, the Company grew and by its peak in the 1930′s was serving more than fifteen million meals per year in dining cars, restaurants and hotels nationwide. Many of the concepts incorporated by the Fred Harvey Company (e.g., marketing, financial controls, vertical integration) made it a forerunner of today’s successful hospitality franchises.

The business began to decline slowly as air travel became possible, but the depression so slowed business and industry that fewer and fewer people traveled by any means, let alone by train. However, traffic reached a peak during the years of 1942 to early 1946 as World War II troop trains added to the number of trains handled. An average day consisted of 40 passenger trains running through Newton, with some days reaching over 45. Often with very short notice, (after all, troop movements during war are NOT found in the papers) the Harvey Houses again rose to the challenge. The Harvey Girls were frequently on call to serve meals in the middle of the night.

During those bustling years of passenger trains, one could expect to see “car toads” (car inspectors), car oilers and coach cleaners on each shift, busily preparing the trains for the next leg of the trip; a coach carpenter, who made emergency repairs in the cars while they were stopped; crewmen servicing the kitchens on the trains and loading charcoal; a car lighting and air-conditioning man checking lights, fuses and air-conditioning; red caps assisting passengers with their luggage; and station platform employees handling the baggage and mail, among many others. There were Harvey laundry employees who laundered the linens for the passenger trains as well as the station eating places.

Among the many services performed at Newton was that of turning homing pigeons loose on the depot platform. Pigeon fanciers would ship crates of pigeons to Newton in care of the Railway Express Agent with instructions for them to be turned loose at a designated hour, and such would be done. 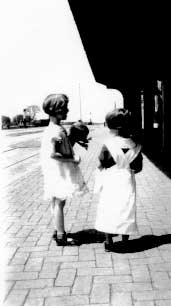 Fred Harvey operated food and newsstand services in the Newton depot for 75 years. Jim Gillmore’s office is located where the Harvey newsstand operated and the rest of Sizemore, Burns and Gillmore’s facilities are located where the Fred Harvey Dining Room operated. During those years, the trains made stops for breakfast, lunch and dinner at the station and the dining room was open to the public. 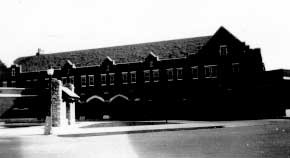